The Observatory and the Teide volcano – Tenerife webcam

Click on the arrow for move to the next webcam >>> 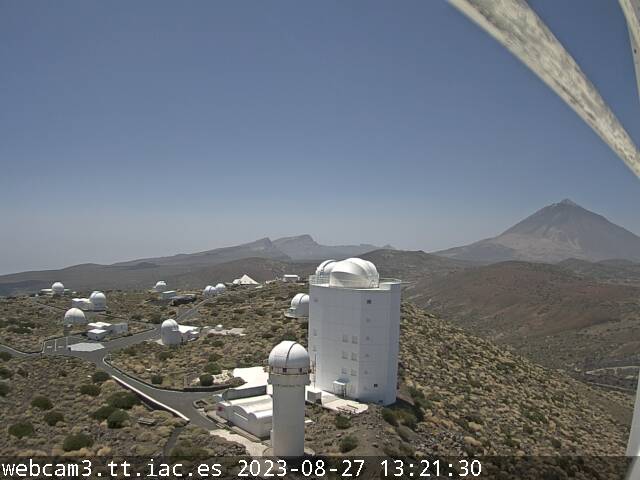 Many tourists visiting the island of Tenerife, want to get of the volcano Teide. Withhelp this webcam you can see Teide. But what are these white buildings in the foreground of the web camera? Your view is given to the Teide astronomical observatory, which is one of the largest observatories on the planet Earth. It was founded in 1964, and the first telescope was installed here even earlier. Than the Teide volcano attracted the most famous astrophysicists in the world? It is believed that the Canary Islands – one of the best places on the globe, where you can see the night sky. It’s a pleasure to watch them: the extra light that is characteristic of big cities does not interfere, and the climate is very favorable, and the air is transparent-transparent. The observatory of the Teide volcano is also called the observatory of Izanja, since it is located near an extinct volcano with the same name. Initially, it was planned to build it at an altitude of 2718 meters at the peak of Guahara, but then decided, that it will situated a height of 2,290 meters. There was more space for building of several buildings.

So in 1964, there was a whole town for research, which you can see with the help of an online camera of the Teide Observatory. The image on the camera is updated every 3 seconds. In this observatory there are many powerful telescopes that belong not only to Spain, but also to Germany, Belgium, other European countries and the United States. These are radio telescopes, stellar telescopes, and telescopes that can be controlled remotely. Scientists working in the Teide Observatory study not only the night sky. The main object of observations of astrophysicists is the Sun. They study its core, as well as the radiation of this distant star and solar eclipses. In 1998, scientists discovered 11 asteroids. The Isanya Observatory is not a classified object. You can come here on an excursion, but first book a place in the excursion group. Excursions are held every day at a certain time except Saturday. You can listen about the Sun in Spanish, English and German. Tourists are given the opportunity to look at the stars through huge telescopes.

You can rent a car  in Tenerife  and go  quickly to Teide Observatory.   You can rent a car   with help service Rentalcars.   Before you go on the Teide, you should know, that the observatory of Isanya is located at a high altitude. If you have health problems, especially with a heart or breathing, then you need to consult your doctor about the possibility of visiting this place. Also, tourists should know, that the observatory can be opened for visits only in clear weather from April to October. In other months you can only stroll through the gravel paths of the scientific town and admire the magical views of the volcano. Do not forget to put on comfortable sneakers and put on warm clothes, as it’s cold and there’s a strong wind. The island of Tenerife attracts travelers with its amazing nature. If you are at home, but already planning a trip to this Canary Island, a live webcam of the Teide Observatory will show you snow-white buildings and a beautiful volcanic landscape. You can watch them at any time of the day. Thanks to good quality, the webcam shows an excellent picture, and you can admire it and dream about the upcoming visit of this place.